Constance Tankerville-Chamberlayne and Arthur Oke first met in 2017 as two Londoners in Dubai. Constance worked as an editor for Harper’s Bazaar Arabia, while Arthur was a consultant traveling frequently to the Middle Eastern city. It wasn’t quite love at first sight, but it was close. “We had our first date on a rooftop bar under the warm Arabian sky and clicked instantly,” Constance says. “A short three months later, we moved in together.”n the winter of 2021, Arthur proposed to Constance atop the peak of Crest’ota in Switzerland. As they sat on the precipice, he asked her if she could stand up—and Constance, thinking she was accidentally sitting on his scarf or jacket, obliged. When she turned back around, he was “beaming on one knee, holding the most beautiful ring I had ever seen.” 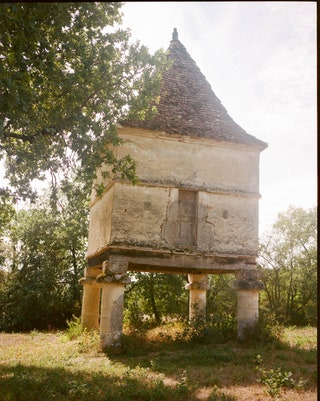 ess than a year later, the two held a late-September wedding at Constance’s family home in the French countryside outside Toulouse. “This time of year in the region is so beautiful—it’s the tail-end of the summer, so it’s not too hot, all the crops are nearly all harvested, and there is a sentimental sense of change in the air,” Constance says. The bride, who works as the global marketing director at Stine Goya, used her vast event-planning experience to orchestrate the early autumn affair, asking Hannah Nicolet from Noble Nuptials to act as a vendor liaison and production manager. “The look and feel were rustic and local,” Constance says of the overall aesthetic.

Naturally, she had a clear vision of her wedding dress from the start. “I’m not one for frills or fuss and feel like my best self in clean lines and supple textures,” she explains. So Constance asked Hermione de Paula to design her a simple silk gown with an effortless silhouette, as well as a customized statement veil. The designer then embroidered the flowing headpiece with motifs of French wildflowers, Constance and Arthur’s initials, their wedding date, and finally, the chorus of their favorite song: “Harvest Moon” by Neil Young. (Because I’m still in love with you / I want to see you dance again / because I’m still in love with you / on this harvest moon.) Finally, Constance tied the look together with gold and drop pearl earrings by Alighieri and a pair of cylindrical-heeled Jimmy Choos. 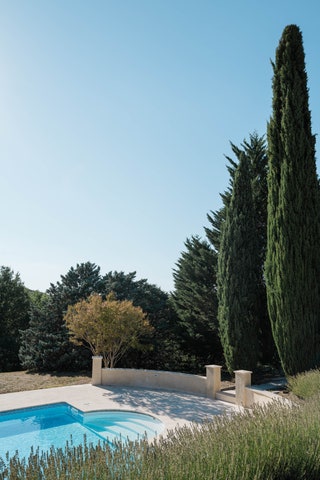 On the Latest Episode of Good Morning Vogue, A New Allure: How Virginie Viard Is Making Chanel Her Own

She decided on a mix of styles for her bridal party. Her sister, Faith, wore a full Stine Goya look in a powder pink that artfully accented her tattoos, whereas her friend Lewis wore Bottega Veneta flares and an Issey Miyake shirt. Others opted for pastel gowns in various cuts and lengths. “I wanted them to feel relaxed, ready to have a good time, and like their best selves, so we all worked together to find colors, shapes, and textures that would compliment each individual but also look great together in a picture,” Constance says.

On September 23, Constance walked down the aisle as her childhood friend Florence Rawlings sang “Kiss Me” by Sixpence None the Richer. Arthur was waiting at the end in a tan custom Saville Row suit. He began to cry as she reached the end. “I had never seen him so overcome with such tears of joy,” she remembers. “It will be ingrained in my mind forever.” Another particularly poignant moment came when the guests stood up, mid-ceremony, to sing “Moon River” together—something Arthur and Connie describe as “a transcendent moment neither of us will ever forget.” After their vows, the couple left hand in hand while their favorite Neil Young song played. 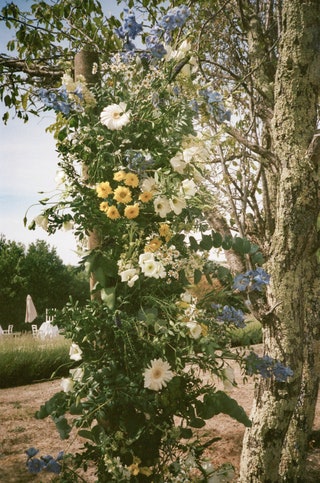 Cocktail hour was held in the front garden. Waiters passed canapés of fresh figs with goat cheese, while bartenders served a custom gin, lime, and lavender cocktail developed by Copenhagen cocktail company Aeris. (All the while, white hydrangeas floated in the pool.)

Afterwards, the 120-person crowd headed to dinner under a billowing white tent—which, Constance jokes, ended up being the best investment they made. Halfway through the speeches, the heavens opened. “It was the most rain at a wedding our wedding coordination team had ever witnessed,” she admits. Thankfully their band, The London Essentials, turned the dinner tent into a raucous dance-on-table party. “Everyone was standing on chairs and tables, singing along with them as the thunder and lighting rumbled on outside,” she says. “It was absolutely magical.” 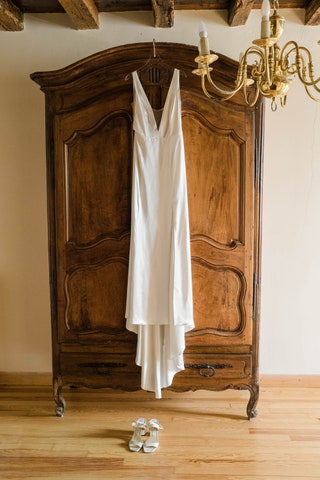 After the storm let up, guests made a dash down the hill to the dancing tent—whose floor, due to all the water, turned into a de-facto slip and slide. Their first dance to “Into The Mystic” by Van Morrisson ended up more like a first stumble: “We just gripped each other tightly and laughed our way through it,” she says.

Turns out, everyone found the situation a bit comical—and, after a few negronis and espresso martinis, a whole lot of fun. As the night grew later (and rowdier) Constance changed into a short, shimmery minidress designed by her boss, Stine. “She knew I loved the languid draped silhouette of our green sequin Louiza dress, so took that as a base, made it shorter on the hem, lower on the neckline, and proposed it in the most beautiful ivory sustainable sequin,” she says. The festivities ended up carrying on until three in the morning, and two days later, the couple was still cleaning up. “The mark of a good party!” Constance concludes.