I am standing in an open, straw-padded barn—located in the fairgrounds of a Hudson Valley town—watching a nun in a black habit and baseball cap walk an Icelandic sheep on a leash. Around me, stalls are packed with rapt ticket-holders (hobby farmers, raw wool fanatics, local families), who’ve each paid $15 to witness a litany of sheep-and-wool-related displays, and who greet the pair with polite applause. 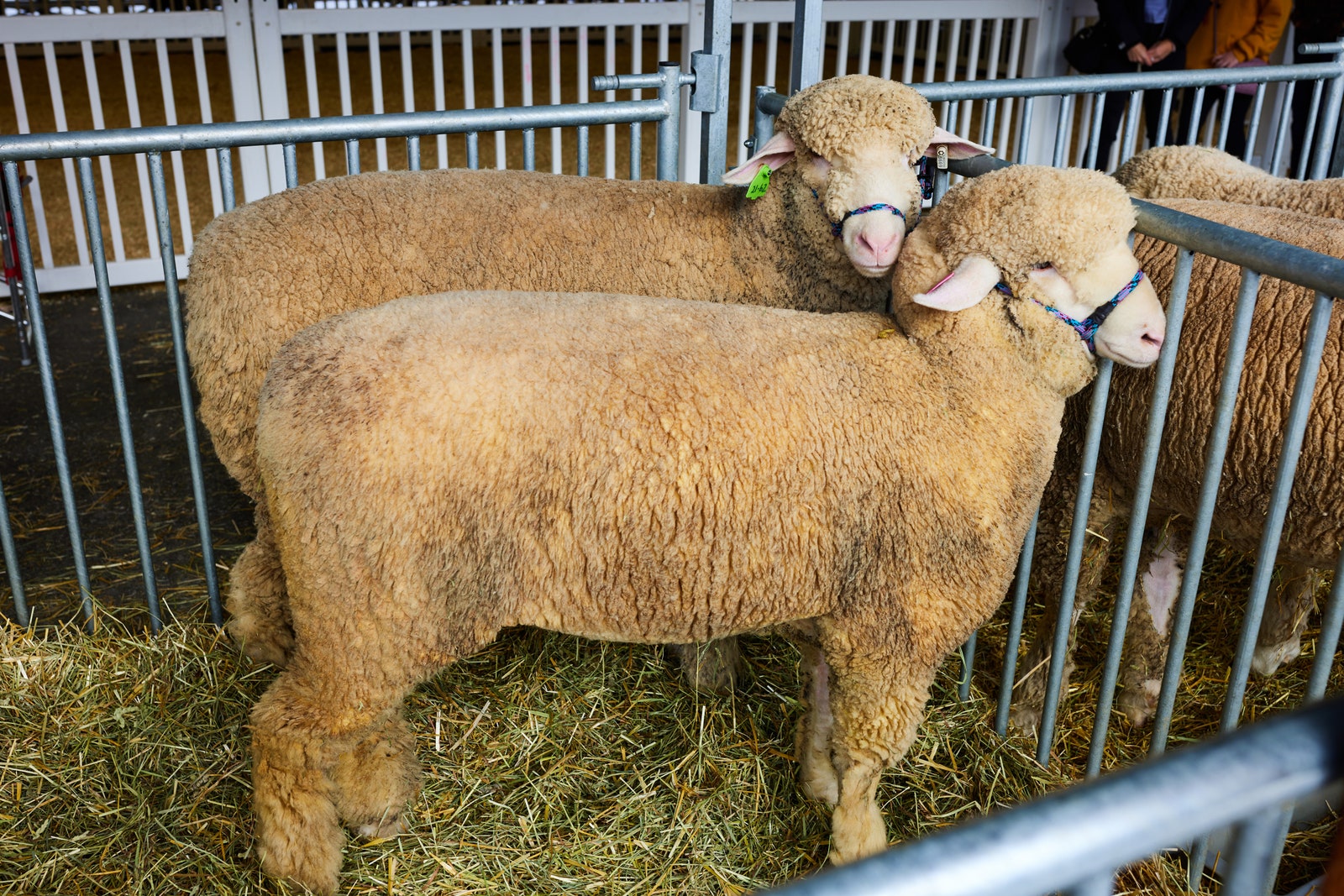 An announcer reads the stocky animal’s credentials aloud, as she’s done with every breed featured in the Sheep Breed Parade. Thus far I have learned that shetlands are “intelligent, very good at recognizing human faces”; the longhaired Teeswater possesses a “spectacular luster”; and the Leicester Longwool was imported by two former U.S. presidents with hopes of improving their personal flocks. (Distressingly, information on a breed’s “sweet personality” is often followed by a comment on the tenderness of its meat.) The Icelandic sheep, I hear, was imported to Canada in the 1980s; is triply valuable to humans for its milk, meat, and fiber; and becomes aggressive when foraging. As the nun leads her horned companion across the yellowed floor—“You’re giving us all a lesson in how to walk properly, aren’t you?” says the announcer, admiringly—I realize this is the first time I’ve considered a shepherd-nun might exist, even though sheep are the most biblical of animals, a metaphor for God’s obedient flock. Later that day, there will be more nuns with farm animals. I will linger by a stall of Cashmere goats belonging to the Greenwich-based convent St Mary’s on the Hill, and watch a nun eat what looks like—I swear—a shepherd’s pie, surrounded by soft, downy creatures.
Staged at the Dutchess County Fairgrounds in Rhinebeck, New York, The New York State Sheep and Wool Festival is a weekend-long affair, themed around fibrous animals and the products derived from them. When it launched in 1980, it was a much smaller, more intimate bred ewe sale, run by local shepherds hoping to market their wool. (Blankets by Bartlettyarns, who’ve operated in Maine for a century, were sold onsite from the outset too.) Now, it features some 240 vendor stalls, plus weaving, warping, and spinning demos, and lectures on farming and breeding. (Overheard while walking past one talk: “this yarn is perfect for doll hair.”) The festival is also among America’s largest annual gatherings of fiber-arts enthusiasts: those who sew, knit, needlepoint, 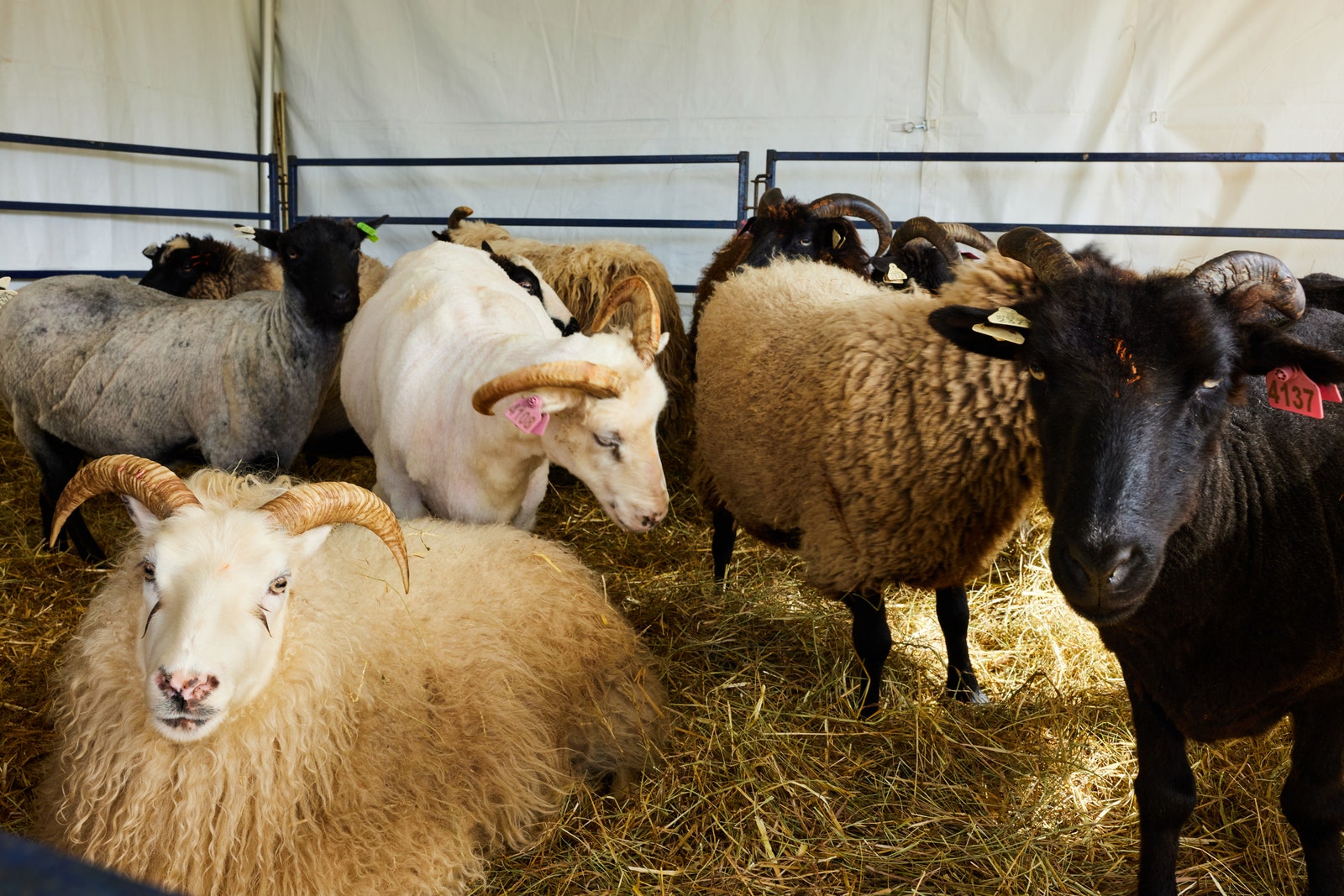 As attendees perused their pastoral Disneyland—tents filled with premium, natural yarns bagged like cotton candy; an alpaca meet and greet; a book signing with the author of Mystical Stitches—many donned the official festival merch. (Namely, “Sheep and Wool”-emblazoned hooded sweatshirts or black logo tees.) Others wore jaunty headgear that simulated a sheep, its body abstracted: headbands affixed with wide, floppy white ears, tufts of curly fleece wedged between them like barnyard mohawks. My favorite hat was modeled by an elderly man in blue jeans and sneakers, and appeared to be custom-made—an enormous, droopy, three-toned woolen wizard hat, reminiscent of Gandalf the Grey. Elsewhere, I watched people rush between tents in fuzzy leg warmers, flocculent beanies, oversized scarves with pumpkin-colored borders, and chunky cable-stitched cardigans. 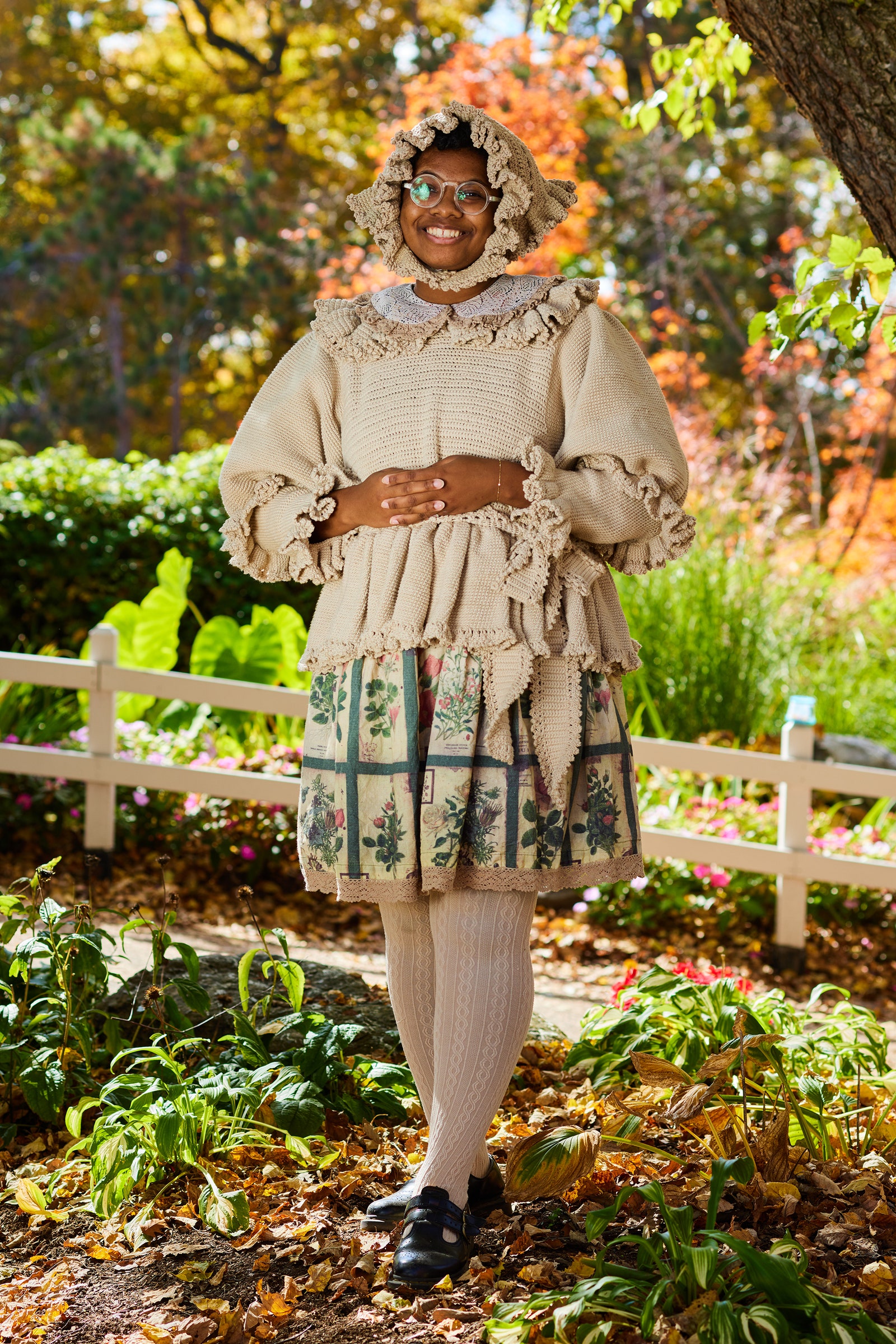 Outside the livestock arena, where a leaping llama contest had just taken place, seven women posed for a photograph in matching homespun sweaters, all featuring a contrast spider-web design across the décolletage. (One farmer told me it’s common for fiber fans to return every year, showing sellers what they’ve created with last festival’s fleeces.) First-time visitor Sabrina Brokenborough—who traveled from New York City with her friend’s mom—was thrilled to be surrounded by authentic, wholly natural fibers, and to meet the animals that had provided them. A vision in flouncy oatmeal, her headscarf and sweater were hand-crochet from 100 percent cotton yarn. The sweater took Brokenborough two months to make, and was an original design inspired by 1830s garments. “I like to look at historical fashion for my knit and crochet projects,” she explained. “A lot of the things I make have a ton of gathers with lace and frills.” Brokenborough has been crocheting since she was five, and learned to knit in college. She finds the process of forming each stitch to be soothing, “and when you finish your project, you have an immense sense of pride in what you’re wearing.” When she left the fairground, it was with 20 sandy balls of wool from the Brown Sheep Company, sold at a heavy discount. “I love the Lamb’s Pride yarn because it’s 85 percent wool and 15 percent mohair,” Brokenborough said, “And the company makes it permanently moth-proof without harmful insecticides.” 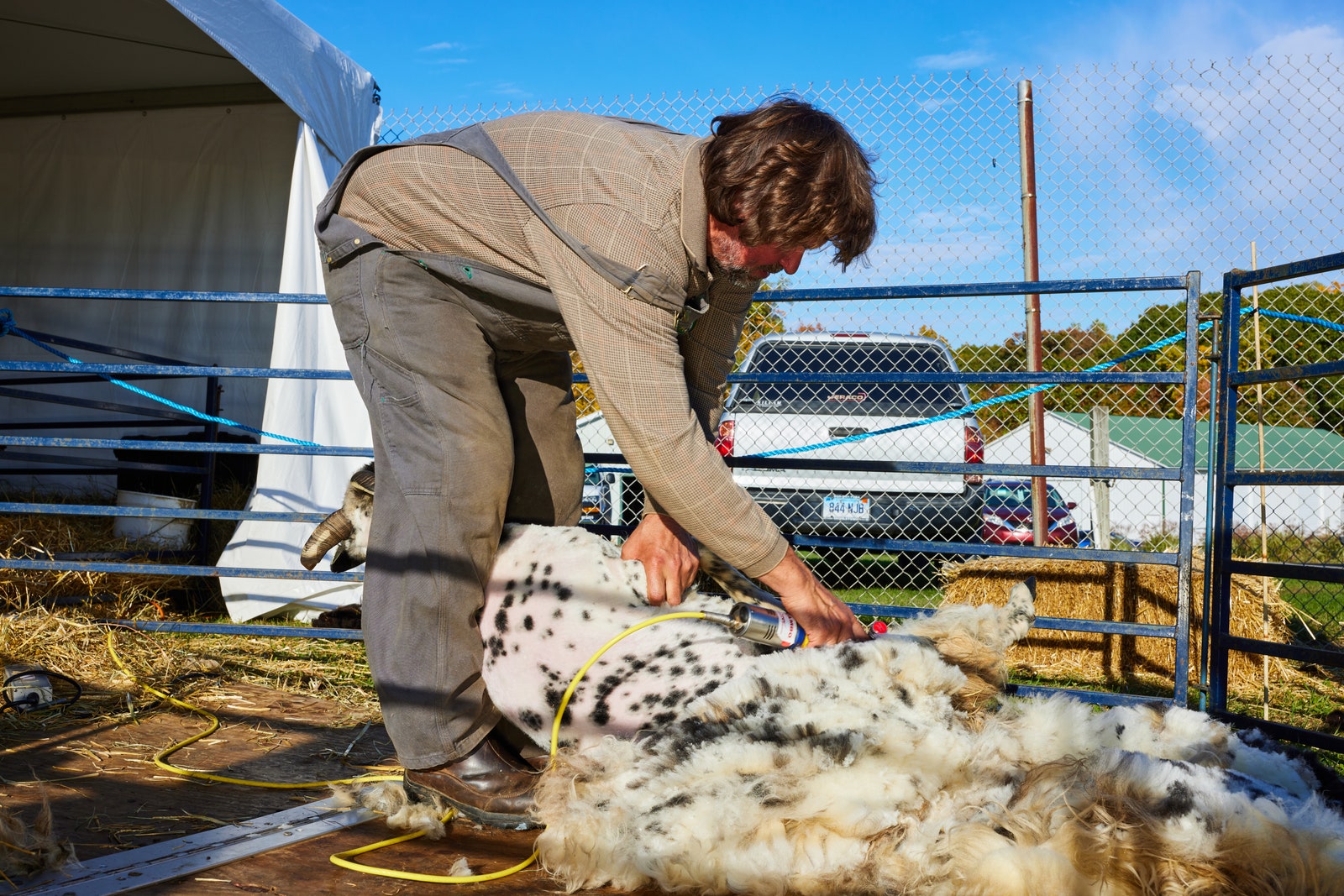 One pervasive condition of modern life is our complete estrangement from the objects that labor produces. When we encounter a product—say, something we eat or wear—we experience it as what Marx terms an “alien entity,” separated from its maker. A bolstering element of the Sheep and Wool festival—beyond the touching of grass and petting sweet-natured animals—is the momentary collapse of this distance, and an unveiling, however small, of the labor-intensive processes behind what we wear. Take the fleece-to-shawl competition, a live three-hour event, where teams comprising four spinners and a weaver produced a 72-by-18-inch design from scratch. The crowd watched as pre-prepared looms were set up; as pre-washed fleece was carded (brushed to remove dirt, and aligned for spinning); and as complex designs emerged, stitch by stitch. According to judge Alice Seeger, a weaver and spinner of 47 years and the founder of Belfast Fiber Arts, extra points were given for using the featured breed’s wool, and for properly navigating its characteristics. “This year, it was a mixture of Leicester Longwool and Merino, a springy fleece which on the loom under tension can seem to be the right measurement, but shrinks when taken off it,” she said.
All three teams, Seeger mentioned, have competed together for years; 2022 winners Spin City actually found each other on MeetUp, and come from diverse backgrounds. “I always say you can make a lot of things when you spin, dye, weave, knit, or crochet,” she said, “But the most important things are the friendships.” Danielle and Greg Fowler, who ran a stall for Yippee Farms, agreed. Since buying their small hobby farm from a friend, and relocating their family there, a new community has materialized around them—and their goats. “Before we purchased our first Cashmere goats, people invited us into their farms to learn how to collect cashmere,” said Danielle. “They invited us to seminars: Cornell University partners with the Cashmere Goat Association, teaching farmers how to care for goats properly. People have been so willing to mentor us on all of it: raising goats, processing fiber, and ultimately, fiber handicrafts.”